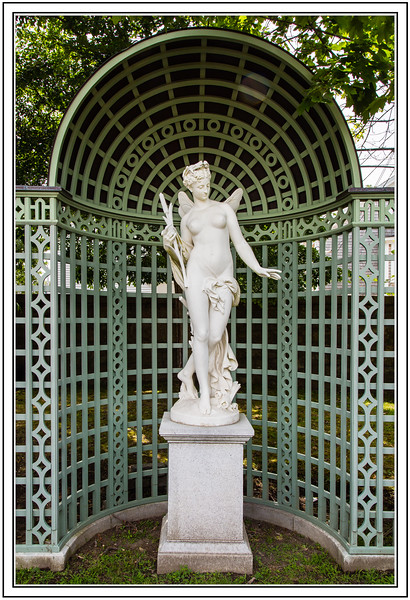 Newport, RI - The Elms is a large mansion, facetiously a "summer cottage", located at 367 Bellevue Avenue, Newport, Rhode Island, USA. The Elms was designed by architect Horace Trumbauer (1868–1938) for the coal baron Edward Julius Berwind (1848-1936), and was completed in 1901. Its design was copied from the Château d'Asnières in Asnières-sur-Seine, France. The gardens and landscaping were created by C. H. Miller and E. W. Bowditch, working closely with Trumbauer. The Elms has been designated a National Historic Landmark and today is open to the public. The estate was constructed from 1899 to 1901 and cost approximately 1.5 million dollars to build. Like most Newport estates of the Gilded Age, The Elms is constructed with a steel frame with brick partitions and a limestone facade. On the first floor the estate has a grand ballroom, a salon, a dining room, a breakfast room, a library, a conservatory, and a grand hallway with a marble floor. The second floor contains bedrooms for the family and guests as well as a private sitting room. The third floor contains bedrooms for the indoor servants. In keeping with the French architecture of the house, the grounds of The Elms, among the best in Newport, were designed in French eighteenth-century taste and include a sunken garden. The original American elms having succumbed to Dutch elm disease, the striking shade trees are now weeping beeches. On the edge of the property a large carriage house and stables were built, over which lived the stable keepers and gardeners. When the Berwind family began using automobiles, the carriage house and stables were converted into a large garage. The head coachman, in order to keep his job, became the family driver, but he could never learn to back up, so a large turntable had to be installed in the garage. That structure was later replaced by a purpose built, two story 125-foot (38 m) × 70-foot (21 m) building of limestone. Constructed beginning in 1910, it was the largest private garage in America, and featured a central indoor track, and two integral gas tanks. [Wiki]     Link to Photo Without Frame     Thank You for Making this Daily Photo Tied for the # 1 Pick on 03-23-2018.