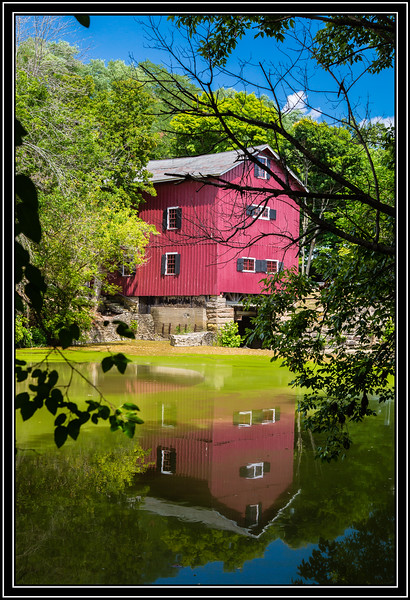 Upper Sandusky, OH - Wyandot Indian Mill - Just northwest of Upper Sandusky, along the scenic Sandusky River, is the Wyandot Indian Mill. Built in 1861, the mill is the nation's first educational museum of milling in its original structure. The Mill finally ceased operation in 1941 and was later transferred to the Ohio History Connection. The Mill was cleaned, restored, and formally opened to the public in 1968. The three-story structure, built with original materials, replaced the saw mill (1819) and the original one-story grist mill (1820) which the United States Government built to reward the loyalty of local Wyandotte Indians during the War of 1812. Many exhibits are placed around the original mill machinery. It was operated by Leffel Turbines and the old stone burrs and bolting chests are still visible. The restored miller's office displays historic artifacts related to the history of milling in the nineteenth and early twentieth centuries.     Link to Photo Without Frame            Thank You for Making this Daily Photo Tied for the # 1 Pick on 09-02-2017.