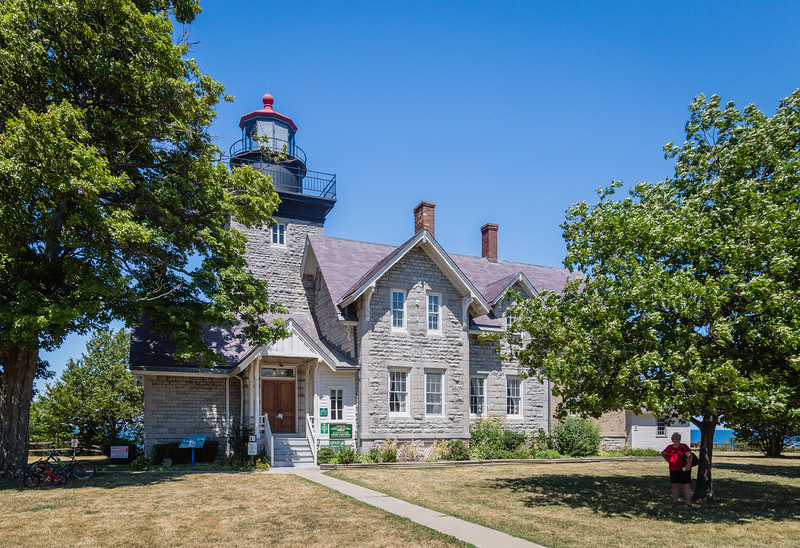 Barker, NY - Golden Hill State Park - Thirty Mile Point Lighthouse was built in 1875 at a cost of $90,000. The 75 - foot tower and adjacent keeper's quarters were built from limestone shipped in from a quarry near Watertown, NY. The beacon was a Third Order Fresnel Lens (cost $3,300) that magnified a kerosene flame to become visible at up to 18 miles. The rotation of the lens was powered by clockwork gears and counterweights in the tower. The keeper's family would inhabit the house while the keeper would maintain the light and facilities as an employee of the US Lighthouse Service. In 1885, the lighthouse was electrified. Fifty years later the US Coast Guard took over operations, expanded the keeper's quarters to house an additional family, and constructed a foghorn building to the west. In the early 1950's rising lake levels increased erosion at Thirty Mile Point. Not only were the shoals and sandbar disappearing, but also the land around the lighthouse was being claimed by the lake at an alarming rate. The Coast Guard countered the loss of land by constructing a concrete jetty and lining the beach with large boulders. By 1958 the hazards that created the need for the lighthouse were swept away by erosion. The Coast Guard decommissioned Thirty Mile Point Lighthouse, dismantling the lighting and motors. A simple steel tower with an automatic beacon was erected just to the west of the lighthouse to help aid with lake navigation. The property surrounding the lighthouse was acquired by New York State in 1962 to be developed into Golden Hill State Park. In 1984 the lighthouse was handed over from the Coast Guard to the state. Through the stewardship of the park staff many aspects of the historic lighthouse have been restored while others have been improved upon. In 1997, the Coast Guard's beacon light was moved to the lighthouse tower in a monumental step toward restoration of this NY maritime treasure.